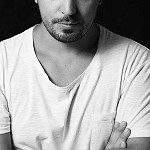 32 years old now producing and djing, but in the beginning he started searching sounds, by collecting cds and vinyls.

In the summer of 1996, he presented his first radio show at a local radio station, possibly the first radio broadcasting house and dance music in his city. During the radio show days, he started attending piano lessons for 2 years and after that he kept on alone.

The radio show, moved in more radio stations and in the spring of 2000, he decided to name his project Consoul Trainin which means: 'The feeling that brings you music stereo and console in your soul'.

He started mixing tracks, sharing the mixes with local DJs.

In the year 2001, he decided to create his first tracks. More ideas concerning tracks come up, and get low level production in the start, but passion and further studying in music made him improve his sounds.

John studied physics. John loved physics and he tried to put it together with music. He started playing like a DJ in a local clubs like a guest DJ and afterwards like a resident at local clubs for two years.

At the same time, he started working at radio stations, as a music supervisor and advertisement spot producer .

Many releases came out from Consoul Trainin but the great success came one year later in the summer of 2007, Planetworks Records released the track by Consoul Trainin, called Stop, a remix of the classic track by Sam Brown, this time with the vocals of Joan Kolova.

Planetworks made Stop a big radio hit and got full support from many radio stations and DJs in Greece and afterwards in Europe. Stop came out in April of 2008 by D:Vision Records in Italy with Remixes from Rivaz and Nocola Zucchi with a lot support.

At the same time, parties where the name Consoul Trainin appears, start taking place in many places in Greece.

Nowadays the story continues with worldwide support as Stop came out from Red Stick Recordings (the imprint label of Strictly Rhythm) in US with remixes from Diego Donati and F&A Factor.