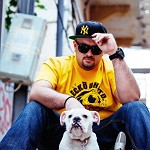 Mixing, remixing and producing is just second nature to him.

Making the most of every production tool available, he effortlessly moulds tracks into novel, rhythmic art pieces. Always instinctively trendy, he remains at the forefront of the evolving world of music.

Jack Sleiman's success made it on local and international TV stations across the globe, first as an artist and then as a TV Host for the infamous Trends and The City on MTV!

Jack Sleiman is Internationally known to put out the most outrageous club performances hyping up crowds from Canada To The World!

Utilising feedback from the show, he’s managed to broaden his base of listeners keeping up with the latest tastes. The Urban Project on MIX FM Lebanon is one of the regions most listened to Urban Shows with record breaking listenership week after week!

Whether it is RnB, HipHop, Reggae, Reggaeton, Trap, New or Old School, Jack Sleiman's talent turns every show into an experience unlike any other on the air-waves and on stage.