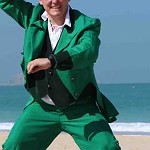 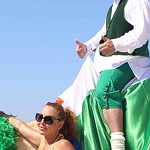 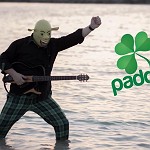 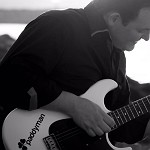 I am a full time entertainer (from Ireland) based in Dubai, UAE.

I have shared the same bill as other notable Irish acts such as The Saw Doctors, Sharon Corr and Sharron Shannon.

The name Paddyman came about as a result of wanting to perform some funny jokes, stories and songs as part of my act. I wanted to visually differentiate this from the Irish singalong and high energy dance songs that I perform.

And I was also conscious of ways I could reduce the risk of possibly unintentionally offending people in the audience, especially in the UAE, with some of the songs.

Therefore, I started wearing a leprechaun hat and beard for these parts of the act. This immediately became very popular as people could clearly see that I was about to perform some funny stuff and they listened up!

The original, and some cover, comedy jokes and parodies that I perform have since become my trademark and I continue to build that part of the show.

Besides this I regularly perform for weddings, corporate events, parties, festivals and in Irish bars all over the world, from Hong Kong and Bahrain to Ireland and Canada.

My Life Story
I’m often asked how I ended up in Dubai, playing funny songs and Irish music in bars and at weddings.

Here’s my story in brief:

I started playing guitar when I was about 15, inspired by my father’s love of music and his accordion playing.

After about six months of practicing at home, Dad came home one night and announced that we had our first gig in the local pub – The Bellyard in Monasterevin, Co Kildare – as the group that was supposed to play had cancelled!

On the night we turned up in matching shirts and set up some speakers he had rented.

I played very basic chords on the keyboard and guitar and my Dad did all the singing, accordion playing and entertaining out front.

It wasn’t long before the pub started to empty!

After about an hour, the only people who stayed in the place were the local travellers because they knew they wouldn’t be served anywhere else.

Despite this, there was one drunk fella who stood up to leave and loudly announced to the bar, “These are the worst piece of sh*te band that I’ve heard in all me jaysus life!”

My Dad just laughed it off and winked at me as if this was normal behaviour to be learned from.

He later said, “When something like that happens you have to remember, don’t stop playing no matter what happens! Even if the tinker started a fight, you just keep going.”

Undeterred by the lack of appreciation for our craft, he then organised a regular gig in the Harp Bar in Kildare town. This one was just a sit down, unplugged session beside the open fire.

He said the reason we had been booed in Monasterevin was because of the equipment, so we had better build up a bit of confidence playing without mikes first before we re-launch the act.

And so we did! I sang my first song, Sonny Don’t Go Away with my grandad and dad beside the fire as the ladies in the pub threatened to punch anyone who kept talking while the young lad had a go.

I’ve been playing ever since!

One of the songs I learned around then, (nearly 20 yrs ago,) was the great song by Shane McGowan of the Pogues, Fairytale of New York.

Since then I have had the pleasure of playing music all around the world including North America, I was based in Canada for six years; Europe in Ireland, France, and Italy); and Asia in the UAE, Oman, Bahrain, Qatar, and Hong Kong etc.

These gigs vary from small intimate gigs for a few kids in the desert (or at Fibbers for Christmas) to larger gigs for thousands of people at festivals or alongside well known Irish performers like the Saw Doctors, Sharon Corr, The Commitments, The Wolfe Tones, Aslan, Damien Dempsey, Ardal O’Hanlon (comedian), Sharon Shannon and other.

Music is a great gift and I hope to continue singing, joking and playing music for many years to come!