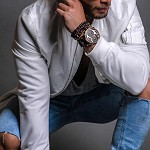 Slim was born and raised in Paris (1988) and began his career while still in high school.

In love with the music since he was a kid, Slim first started alongside Paris-famous DJ Ken-j in 2007 with who he first released various mixtapes available on soundcloud.com/djslimfromparis.

Slim has always been heavily influenced by a Latin atmosphere and he first organised Latin nights in the French capital.

Raggaetton and Moombahton music were his first sets before a smooth shift to a more diverse taste in music.

In 2008 Slim started to export himself overseas and landed in Abu Dhabi, the UAE Capital where he has been noticed by one of the biggest promoters Naz El Masri who later became his mentor.