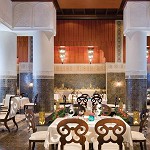 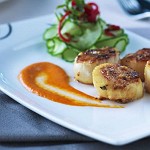 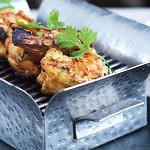 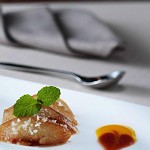 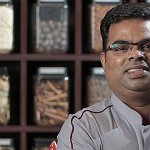 From the moment you step inside Amala, you’ll find the welcome is warm and authentically Indian.

The cuisine, known as Mughlai, is strongly influenced by Persia and Turkey and is known for its richness, with exotic spices, dried fruits and cream.

Every evening Amala serves an exceptional a la carte menu where guests can choose from an abundant array of indulgent dishes freshly prepared with an open style kitchen.

Dine within the magnificent interiors or outside on the terrace as you sample the varied flavours of North Indian cuisine through this truly extravagant dining experience.

About Amala
The Mughal Empire was an Indian imperial power that ruled a large portion of the Indian subcontinent. It began in 1526 and by the late 17th and early 18th centuries they invaded and ruled most of India.

At the height of their power around 1700, they controlled most of the Indian Subcontinent extending from Bengal in the east to Balochistan in the west, Kashmir in the north to the Kaveri basin in the south.

Muglai cuisine represents the cooking style used in Delhi, Lucknow, Punjab and Kashmir. The cuisine is strongly influenced by Persia and Turkey and is known for its richness which comes from exotic spices, dried fruits and cream.

The taste of Mughlai cuisine varies from mild to spicy.

Whose Line Is It? Brought To You By The Noise Next Door - 11 Jun 2021
International Artist, Arts, One-Off Event
Related to Amala