at The Oberoi Dubai, Business Bay 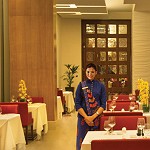 Ananta is open for dinner seven days a week.

Menu
In royal cuisines the main courses are referred to as qorma, qaliyan, salan, nehari, do pyaza and jeeman, where Qorma is a gravy with a dominant base of nuts in it.

Salan, means cooking of vegetables and meat together. Meat which is simmered overnight in its own stock is known as Nihari, whereas in Do Pyaza preparation, onions are used twice during the different phases of cooking and Qaliyan has a strong flavour of nuts and cashew.

Jeeman is characterised by a unique flavour drawn from the simplest and the most basic ingredient which are transformed to delicacies.

Sadgi Khwan applies to the comfort cuisine from the royal vegetarian kitchens of Awadh, Hyderabad and Rajasthan. These are represented through an array of vegetarian dishes which are full of flavour and refreshing.

Biranj is a term referred to as ‘Biryani’, which means fried before cooking. It was brought to India by ‘Taimur the Lame’ in the 14th century from Persia, the humble rice dish made its way to the royal kitchen, where it combined with the Indian pulao to transform into the stately biryani eaten all over the world.

The Indian royals referred to Desserts as Meetha. They were an indulgent lot and quite naturally, their penchant for luxury extended to their cuisine.

Most of them had a prominent sweet tooth and unlike their western counterparts, they did not eat their sweets to close their meal, but instead ate at the beginning or alongside.