The entire At the Top experience is wheelchair accessible. 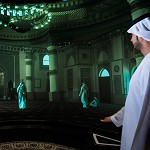 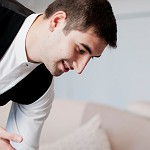 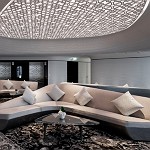 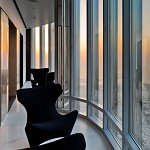 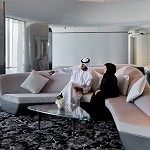 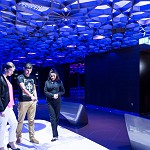 Soaring high at 555 metres, At the Top, Burj Khalifa SKY is fittingly Dubai’s most iconic destination.

Get ready to enjoy exclusive access to the redefined, highest outdoor observatory in the world, spread across levels 148 and 125 of Burj Khalifa.

Your journey begins when you step into the At the Top, Burj Khalifa SKY lounge, from where you will be personally escorted to a dedicated elevator.

Inside, watch in amazement as specially designed projections give you the feeling of flying over global landmarks as you ascend to Level 125.

There are now two At The Top Experiences to choose when visiting the Burj Khalifa.

The first is At The Top Level 124 which is the original observation deck at 456 metres which opened with the building where you can spend as long as you wish.

Or you can opt for the new experience,  At The Top Sky Level 125+148, which starts at Level 148 and is the world's highest outdoor observation deck at 555 metres where you get to spend 30 minutes taking in the breathtaking views before descending tio Level 125 where you can spend as long as you like.

The cost of your At The Top experience varies on which of the levels you visit and what time of day you book. But remember, you don't get the chance to go up the world's tallest building every day, do you?

Level 148
A special elevator brings you up for the crowning experience.

At 555 metres, you can now access the world’s highest outdoor observation deck and enjoy the breathtaking views as your bask in the luxury of our lounges.

Witness a pioneering concept in interactive experiences with a life-size screen that envelops you as you explore different corners of the Emirate.

As you descend gently to ground level, a new exhibit allows you to relive the historic build of Burj Khalifa. Dedicated stations take you behind the scenes where you can listen to testimonials of the ‘People Behind Burj’, giving you insights into every aspect from the interiors and landscaping to the design and architecture.

Level 125
At 456 metres above the ground, and one level above the At the Top observatory, Level 125 offers you a spacious deck to enjoy the stunning 360-degree view of the city.

This level also houses one of our newest attractions, Dubai – A Falcon’s Eye View that allows you to explore the city from a unique perspective.

Facts & Figures
Bringing Burj Khalifa to life required a combination of visionary ideals and solid science. In the process, the project amassed an awe-inspiring number of facts, figures, and statistics.

The Chicago-based Council on Tall Buildings and Urban Habitat (CTBUH) has established three criteria to determine what makes a tall building tall. Burj Khalifa wins by far in all three categories:

Height to architectural top
Height is measured from the level of the lowest, significant, open-air, pedestrian entrance to the architectural top of the building. This includes spires, but does not include antennae, signage, flagpoles or other functional-technical equipment. This measurement is the most widely used and is used to define the Council on Tall Buildings and Urban Habitat rankings of the Tallest Buildings in the World.

Highest occupied floor
Height is measured from the level of the lowest, significant, open-air, pedestrian entrance to the highest continually occupied floor within the building. Maintenance areas are not included.

Height to tip
Height is measured from the level of the lowest, significant, open-air, pedestrian entrance to the highest point of the building, irrespective of material or function of the highest element. This includes antennae, flagpoles, signage and other functional-technical equipment.

Vision
World's tallest building. A living wonder. Stunning work of art. Incomparable feat of engineering. Burj Khalifa is all that.

In concept and execution, Burj Khalifa has no peer.

More than just the world's tallest building, Burj Khalifa is an unprecedented example of international cooperation, symbolic beacon of progress, and an emblem of the new, dynamic and prosperous Middle East.

It is also tangible proof of Dubai's growing role in a changing world. In fewer than 30 years, this city has transformed itself from a regional centre to a global one.

This success was not based on oil reserves, but on reserves of human talent, ingenuity and initiative. Burj Khalifa embodies that vision.

Mr Mohamed Alabbar, Chairman, Emaar Properties, said: "Burj Khalifa goes beyond its imposing physical specifications. In Burj Khalifa, we see the triumph of Dubai's vision of attaining the seemingly impossible and setting new benchmarks. It is a source of inspiration for every one of us in Emaar.

The project is a declaration of the emirate's capabilities and of the resolve of its leaders and people to work hand in hand on truly awe-inspiring projects.

Emaar had but one inspiration, the unflagging enthusiasm set in motion by His Highness Sheikh Mohammed Bin Rashid Al Maktoum, Vice President and Prime Minister of the UAE and Ruler of Dubai, who inspires us to reach for the stars.