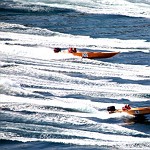 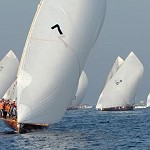 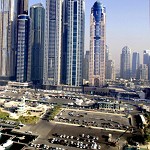 'Mina Seyahi', [which means "pleasure harbour"] has, over the years, witnessed an unprecedented number of local and international water sports events that has rightfully earned it the title of "The home of Water Sports in Dubai".

From its humble beginnings as a small harbour, Dubai International Marine Club, Mina Seyahi has grown to accommodate a fully fledged leisure hub featuring a 294 berth Marina, a water sports Club and organisation which runs 150 events a year.

In the late 1970’s HH The Late Sheikh Rashid Bin Saeed Al Maktoum had a vision to have three distinctive areas in the Emirate of Dubai.

His foresight witnessed the creation of the Jebel Ali Free Zone as the industrial area, Mina Seyahi was to cater to the tourists’ pleasures – hence Mina Seyahi and the central area of Dubai was to serve as the residential locale.

In 1988, the Dubai Marine Club was formed to promote water sports in Dubai.

Mina Seyahi had a natural slipway for boats and dhows to be launched and it was the vision of HH Sheikh Ahmed Bin Rashid Al Maktoum that brought about the transformation of the area into a modern Marina for yacht owners to moor their boats.

In 1994, the vision of HH The Late Sheikh Maktoum Bin Rashid Al Maktoum, Ruler of Dubai saw the official creation of the Dubai International Marine Club (DIMC) through a formal decree.

DIMC was declared the only water sports body authorised to organise water sports activities and competitions in the Emirate of Dubai.

About Us
Dubai International Marine Club (DIMC) was established in 1988 in Mina Seyahi by His Highness Sheikh Ahmed Bin Saeed Al Maktoum to safeguard the traditional water sports and promote Dubai both nationally and internationally.

It is located in a prime area in the city, which has developed around the club over the years, and it now sits in the heart of new Dubai with its numerous hotels and restaurants.

Saeed Hareb who now serves as the clubs Vice President, has been the leading force behind the growth of water sports in the region and the development of DIMC.

With its 300-berth marina, helipad, sailing school, race department, offices and venue facilities DIMC hosts over 50 events each year in various classes including a full programme of traditional events.

In 2010 DIMC hosted the Louis Vuitton Trophy, which was the pre runner for the reformation of the Americas Cup and included six of the worlds top teams and sailors.

New facilities were introduced to cope with the demand in water sports at the club, which has now launched into a more commercial field to offer venue space for other events such as conferences, concerts and functions to either compliment the events on the water or run independently.

The location that Dubai International Marine Club has next to the sea and opposite the Palm Jumeirah has a perfect setting and logistics needed for hosting all types of events.

Marina
The infrastructure at DIMC is at par with any other international water sports body.

Apart from the prime location of the Club and easy access to the ocean, DIMC offers other facilities to its marina members and guests alike.

The Marina offers craning facilities, re-fuelling services, a slipway, and a splendid wet and dry berthing area for 350 vessels (ranging from 25 feet to 160 feet).

The berths are equipped with electricity and water. The marina also has a sports jetty for visiting vessels of up to 160 feet.

Besides on water berthing, DIMC also offers a dry berth facility for up to 200 boats with a workshop for repairs, a travel lift for larger vessels and boat charters. A yearly fishing competition is also organised for its members.