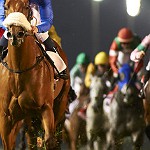 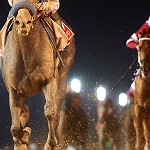 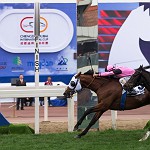 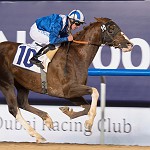 Horseracing began in the Emirate of Dubai in October 1981, when the dusty Camel Track hosted the first Thoroughbred race meeting.

Three races were run - a sprint, a mile and a mile and a half, organised by the office of His Highness Sheikh Mohammed bin Rashid Al Maktoum, Vice President and Prime Minister of the UAE and Ruler of Dubai.

In March 1992 came the official opening at Nad Al Sheba Racecourse, where the highlight was the appearance of some of horseracing's biggest stars at the time - jockeys Lester Piggott and Willie Carson.

A year later, in March 1993, with limitations on the free movement of horses shipping in and out of the UAE, the Dubai Racing Club selected the second best option, jockeys.

Five groups of two jockeys were invited to compete, with senior riders representing the USA, Europe, Australia, Japan and the United Arab Emirates.

The DIJC would eventually pave the way for the creation of the Dubai World Cup.

The first Dubai World Cup was held in 1996 and thrust both Nad Al Sheba Racecourse and the UAE onto the global stage as American wonder horse Cigar, claimed the inaugural running.

It was at the event’s 14th running in 2009 that another American brilliantly bookmarked the Dubai World Cup and brought to an end the chapter at Nad Al Sheba Racecourse.

Well Armed romped to a 14-length success, a record-winning distance to herald the end of the Nad Al Sheba era.

The next Dubai World Cup in 2010 helped introduce the iconic Meydan Grandstand and Racecourse to the world.

The architectural masterpiece is the new home for the Dubai World Cup and is the world's largest integrated racing facility, with a Grandstand seating capacity for more than 60,000 nestling alongside The Meydan Hotel which boasts 285 elegantly appointed rooms and suites.

The excitement of the first Dubai World Cup hosted at Meydan was equalled on the track that year as Gloria de Campeão emerged the winner in an exciting three-horse finish to become the event’s first Brazilian champion.

In 2011 Victoire Pisa and Transcend gave Japan a first win and a one two finish in the coveted race and in 2012 Godolphin repeated the feat with Monterosso in first and Capponi in second.

Fast forward to the present day and the USA was once again successful when the hugely popular galloper, California Chrome claimed the famous race under Victor Espinoza.