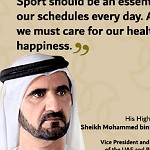 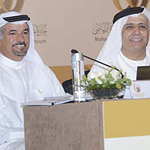 The logo has been designed with a gold medal in mind as a symbol of adherence and commitment to achieve the goals that promote the performance of athletes to jump to the first places.

The chained rings in motion reflect the supportiveness and cohesion among the one community in a sustained motion to express the crystal clear aspirations of promoting sports in all sectors.

The rings also represent the letters DSC graphically written the circle in a motion to open space to reflect the modern aspirations to achieve creativity as excellence in competition arenas as one of the most prominent targets of Dubai Sports Council.

Moving rings represent the circle of community forming the population and supporters base in harmonious motion representing all community classes encouraging all age groups to fight obesity and to involve in sports activities.

Board of Directors:
H.H. Sheikh Hamdan Bin Mohammed Bin Rashid Al Maktoum is DSC president, who is primarily responsible for implementing the decision passed by the board of directors through the general secretariat, supervising the work of general secretariat as well as relations between DSC and UAE football federation, Dubai sports clubs, national bodies, and international organizations.

The Board Directors consists of thirteen members, and they are

Creating a comprehensive sports environment that meets the requirements of the society.

Paving the way for youth to cultivate their sporting and cultural talents and aptitudes in a way that leads them to achieving national, regional, and international tangible results.

DSC Mission:
Investing the revenues as well as the capabilities to set up an ideal sporting sector to make of Dubai a pioneering milestone in sports.

Increase community awareness as well as setting up strategic partnerships .

Achieving financial independence and self funding.

Prominent Achievements:
In a comparatively short period of time since foundation, DSC could successfully achieve many activities and events, namely: