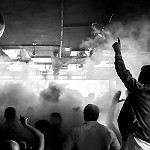 An independent artist management agency with the mindset - No Genre, Just Music

In today's music scene the lines between Producer and DJ are faded and DJs gain opportunities based on the songs they have created as opposed to their ability to move a crowd.

MAASH Management is focused on bringing back the true performers, no matter the tools they use to achieve it.

Events
Founded by Aaditya Khimji, MAASH has its roots in the curation and execution of exclusive events in the Sultanate of Oman and Dubai.

The journey began in 2013, as we  hosted monthly exclusive events  at the The Chedi Muscat's 103m Long Pool, the lengthiest in the Middle East.

On the 10th of October, 2013, we had the opportunity to bring EFIX from the South of France to the Long Pool and we have continued to work with artists from the UK and France.

In 2016, we organised a unique event, Sets On The Beach, at Jebel Sifah in Oman that featured EFIX and DJ Bens over two days on an incredible private beach setting.

More recently, DJ Bens made his debut in Dubai playing alongside DJ AA at one of the city's premier nightclubs, Movida.

In Dubai, we are also currently working with a new concept, The Hobo Camp, under a monthly residency on Fridays - No Genre, Just Music.

​Bookings & Management
​In addition to Events, MAASH also focuses on DJ Management and operates as a Booking Agency in the Middle East.

We are currently developing three artists from the South of France