DJ plays in The Social Room 3 times a week. 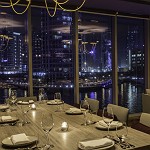 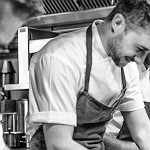 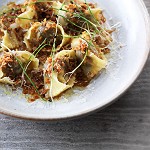 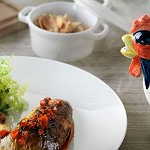 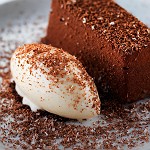 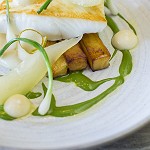 Marina Social is two venues all under the same roof, offering guests a choice of dining in the Restaurant or The Social Room bar next door.

An open kitchen and separate dessert bar allow guests to watch and interact with the chefs during their meal, whilst those on the exclusive ‘Social Table’ can enjoy a bespoke tasting menu.

Fine wines are a feature of Marina Social, with over 1,000 bins to discover, whilst neighbouring bar The Social Room is perfect for pre and post-dinner drinks.

Menu
Jason Atherton and Marina Social chef patron Tristin Farmer have created a contemporary menu drawing inspiration from the Mediterranean, with dishes designed to be shared.

The Social Room
The Social Room is located next to the restaurant, linking through to the terrace. This lively bar creates bespoke and sharing cocktails and punches, as well as an extensive collection of whiskeys.

The Social Room has an exclusive DJ booth in a semi-private area, in action 3 times a week with a resident DJ along with regular guest appearances.

Private Dining
With a floor-to-ceiling wine display, the private dining room at Marina Social is a spectacular setting for a business lunch or celebratory dinner, seating up to 16.

Guests can begin and end their meal with drinks on the terrace overlooking the marina, or in cocktail bar The Social Room.

The Team
Jason prides himself on choosing the most professional, friendly and remarkably talented team he possibly can to run each of his restaurants. Marina Social is no exception, from our exquisite chefs, managers and sommeliers to our immaculate waiters and waitresses, we aim to provide the highest standard of service for our guests.

JASON ATHERTON
Chef and Restaurateur
Jason Atherton started out working alongside great chefs including Pierre Koffmann, Marco Pierre White, Nico Ladenis and Ferran Adria at el Bulli, before joining the Gordon Ramsay Holdings in 2001 and launching ‘Maze’, first in London and then another five globally.

His flagship restaurant ‘Pollen Street Social’ opened in April 2011 in Mayfair and was awarded a Michelin star within just six months of opening, alongside 4 AA Rosettes and no.3 in The Good Food Guide’s best UK restaurants.

Since then, Jason’s The Social Company has grown into a global restaurant group, including Michelin-starred Social Eating House, Little Social, Berners Tavern – named ‘the defining restaurant of the decade’, Michelin-starred City Social and Social Wine & Tapas in Marylebone.

Projects in 2016 include the recently launched Kensington Street Social within The Old Clare Hotel in Sydney; Sosharu, a Japanese restaurant in Clerkenwell opening in March; and an Italian restaurant in Victoria’s new Nova complex.

TRISTIN FARMER
Marina Social Chef Patron
Born in Kirkcaldy on the east coast of Scotland, Tristin attended Glenrothes College whilst working at the historic Peat Inn as an apprentice.

After finishing his schooling and working at the Peat Inn for 4 years, Tristin had the opportunity to work for Andrew Fairlie at the two Michelin star restaurant in Gleneagles Hotel.

In 2007, his passion for fine food took him to London where he worked at Gordon Ramsay at Claridges, starting as Chef De Partie. His talent, creativity and hard work were soon noticed and he was promoted to Sous Chef within three years.

In 2010, he moved to Petrus as Senior Sous Chef, for the restaurant re-launch, helping them to win a Michelin star within a year. Later that year he joined the team as Sous Chef at the prestigious three Michelin star Restaurant Gordon Ramsay in Chelsea.

In 2011 Tristin became the Head Chef at Maze by Gordon Ramsay where he led his team of chefs for three years. After leaving Gordon Ramsay Holdings in 2014, Tristin joined Jason Atherton`s The Social Company, working at Pollen Street Social, City Social in London and the pre-opening of Aberdeen Street Social in Hong Kong, before taking the role as Chef Patron of Marina Social at the InterContinental Dubai Marina.

In 2013, David joined The Social Company as Assistant General Manager for the Michelin-starred Social Eating House in the city`s Soho district, where he had the opportunity to work closely with Jason Atherton for over two years.

David was then hand-picked by Jason to open the first Middle Eastern location for The Social Company in the InterContinental Hotel in the Dubai Marina.