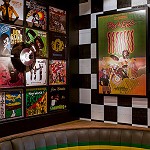 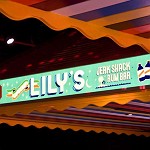 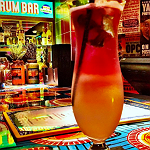 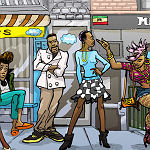 Menu
The Miss Lily’s menus draw from the diverse roots of Jamaican cuisine. Highlights include Jerk Chicken, Escovitch Fish, Oxtail and Curried Goat, seasoned with all of the goodness of Jamaican scotch bonnet peppers and fiery jerk spices.

About Us
Miss Lily's is the creation of designer Serge Becker, who has put his aesthetic stamp on many cool downtown venues including La Esquina, Lure Fishbar, Cafe Select and Joe's Pub at the Public Theater.

This venture is the collaboration of Paul Salmon, Meriem Soliman, and Binn and Genc Jakupi.

Soliman after practicing Corporate Law and working on Wall St left to join the Miss Lily’s management team in addition to her role as In-House Counsel for the Ace Hotel Group.

The Jakupi brothers have been an integral part of New York City's most exclusive nightclubs including Bungalow 8, 1Oak, and The Box.

Whose Line Is It? Brought To You By The Noise Next Door - 11 Jun 2021
International Artist, Arts, One-Off Event
Related to Miss Lily's