Museum of the Poet Al Oqaili

All ages are welcome. 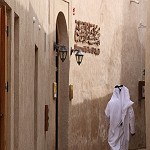 Located at Al Ras area in Deira, the house was built in 1923 and owned by the poet Mubarak bin Hamad bin Mubarak Al Manea Al Oqaili, who moved from Saudi Arabia and lived between 1875 to 1954.

He is considered to be one of the famous poets and prominent luminaries of Dubai, in writing Eloquent and Nabataean poetry.

The poet Al Oqaili has brought a group of skilled builders from Al Ahsa region in the east of the Arabian Peninsula to build this house.

Those builders made both, artistic ornaments and artistic writings, which elevated the aesthetic aspects of the house and granted the house its unique historical value.

The house consists of two floors, in which the rooms are distributed around an internal courtyard and was built from coral, stone, plaster, chandal wood, teakwood, fronds and trunks of palm trees as well as the traditional building material sarooj.

The visitor to the Museum of the Poet Al Oqaili will have a chance to experience the atmospheres of one of the most beautiful traditional heritage houses in Dubai, which expresses the fine sense and taste of its owner as a poet, where the visitor enjoys the beautiful heritage, the architectural designs and its elements.

The museum consists of nine main wings, which are:

The Museum also contains a valuable collection of documents, correspondence and his commandments, in addition to the original collections of poems, some of which are in his own handwriting.

It also contains a valuable set of collections, personal tools belonging to the poet, furniture and household items, which are considered as precious artefacts representing the era of the last quarter of the nineteenth century, until the first half of the twentieth century in the region.

A visit to the Museum of the Poet Al Oqaili presents a unique opportunity to experience the atmosphere of one of the most beautiful heritage houses in Dubai, which expresses the fine sense and taste of its owner as a poet, where the visitor enjoys the beautiful heritage, architectural designs and its elements reflected in the house.

The visitor will also have the chance to view original documents and collections belonging to the poet Al Oqaili. This will increase one's knowledge of one of the most famous poets in the region, who had active contact and interaction with many of the international events of his time.

He was a person who had been visited by many famous figures of his time, appreciated by the rulers of his time, and who was a man of reverence and great wisdom.

The Laughter Factory's ‘Does what it says on the tin!’ Nov 2021
International Artist, Arts, One-Off Event