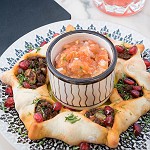 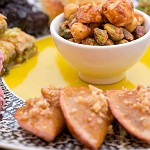 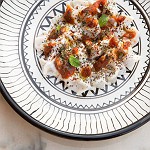 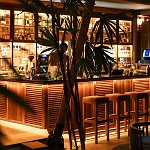 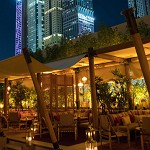 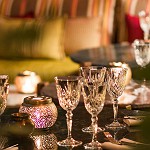 Everything started from its geographical location.

The restaurant is suspended, as though floating, in the heart of a sweltering city district, in the centre of the world, yet in the middle of the desert.

It is somewhere between a garden and a contemporary urban majlis.

In Islamic culture, the majlis is the space where one meets to make decisions, the place where official assemblies take place.

It needed a name that represented this meeting, or confluence, of influences, preserving its link to the history of the region.

Now, according to researchers, the Hanging Gardens of Babylon, the only Wonder of the World never found, would have flourished in ancient Ninive, one of the oldest cities of Mesopotamia.

It was also the capital of the Assyrian empire in the seventh century BCE.

This name requires authenticity, it induces a thousand stories that carry the legend.

This is how Ninive was born.

Go back into the region’s culinary history, understand the changes that have occurred over time, find the gastronomic treasures by sublimating them with French and European techniques.

This challenge lives up to the ambitions of Ninive. Convivial and elegant, its cuisine is served on crockery created especially for the venue by potters, suited to the refined tastes of a clientele accustomed to excellence.

It does not revisit the past but revives sometimes-forgotten tastes to a region with powerful culinary traditions. The dishes are Iranian, Iraqi, Egyptian, Turkish, Saudi or a mixture of these gastronomies.

The sautéed lamb is marinated in spices before being cooked in the casserole dish, and each vegetable prepared separately to preserve its individual aroma.

The chicken is stuffed with saffron rice, raisins, and pine nuts, then sliced at the table.

The Iraqi dish of tashreeb is braised lamb cooked in spices for seven hours, served with lemon and bread. The Barley salad is garnished with apricots, walnuts, mint, cranberries and dates.

Vine leaves are stuffed with rice and beef, which is cooked beforehand at a low temperature. As for the lobster tagine, with ingredients including coriander, parsley, and olives, it will certainly become a favorite dish on Ninive’s rich and ample menu.

In the dining area, everything is done to make the guests feel good, and staff are trained to inform diners about the history of the venue and its dishes. They can recommend pairings to ensure flavors are blended pleasantly.