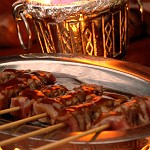 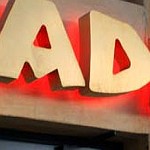 Trader Vic's Madinat, winner of “Best Bar Food” by Time Out Dubai in 2010, offers a true escape with its Cuban band, beautiful décor and waterfront location at the Madinat Jumeirah, featuring a Mai Tai terrace for outdoor lounging.

The Home of the Original Mai Tai® and pioneer of Fusion cooking and Wood fired Chinese oven specialties promises a treat for all tastes and occasions.

Taste The World®
Decades ahead of his time, Vic “The Trader” Bergeron chose to offer Chinese dishes alongside the then contemporary Continental cuisine, creating the original fusion menu. Today, Trader Vic's continues the tradition with an ever-evolving menu featuring dishes from the Mediterranean, the Middle East, Asia, and Japan.

Taste The World® at Trader Vic's and enjoy the subtle smoky flavours imparted by our Chinese Wood-fired Ovens, an ancient cooking method dating back to the Han Dynasty, with dishes like Indonesian Rack of Lamb or our fork-tender BBQ Spare Ribs.

Home of the Original Mai Tai®
Following his history-making creation of The Original Mai Tai® in 1944, Trader Vic created over 200 signature cocktails. Best described as Paradise In A Glass ™, each handcrafted cocktail is an experience all its own.

Using quality ingredients served in Trader Vic's own oversized vessels, mugs, and glassware, these frothy potations really do pack a punch. Feel the sting of our Scorpion Bowl or try a spicy Middle East favourite, the Tiki Puka Puka.

About Trader Vic's
Trader Vic's Worldwide has a rich history of success and innovation that all began in 1934 when Vic "The Trader" Bergeron built a cosy little saloon on San Pablo Avenue in Oakland, California called Hinky Dinks.

After embarking on an adventure to Cuba to refine his skills as a bartender and explore the subtleties of rums from around the world, The Trader transformed Hinky Dinks into a tiki-bedecked tropical retreat aptly named Trader Vic's and put into practice his research on rums.

As popularity of Vic's tiki haven grew, Trader Vic's expanded to international shores in 1963 at London's Hilton Hotel on Park Lane followed by a booming success in the Middle East in 1994 with multiple franchise openings.

Today, the Trader Vic’s family of restaurants has locations in 17 countries across the globe. Taste The World® through exotic cuisine and imbibe from a collection of over 200 Trader Vic’s signature cocktails at the Home of the Original Mai Tai®.