Wearing face masks is optional in all facilities, indoor & outdoor.
- During the performance please remain seated in your allocated seat at all times.
- Standing and dancing in the aisle is not permitted. 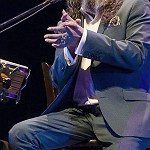 The Fantastic Flamenco Phenomenon Diego El Cigala brings the artistic influence and the graceful rhythms of Spanish flamenco music to the UAE, where he holds a vivid live concert at Dubai Opera on Friday 3 March 2023.

During the concert, people will enjoy unique sensations from the charm of flamenco and Latin melodies as Diego el Cigala will take them on a cultural and artistic journey within a Spanish atmosphere.

Diego el Cigala is a famous Spanish Flamenco gipsy singer, born in Madrid on 27 December 1968 into a family of artists and singers.

His passion for music has overflowed since he was 12 years old. In the late nineties, he began his solo singing career, presenting unique flamenco vocals and rhythms that led him to international success.

Diego el Cigala has an extensive fan base and strong interaction rates on his social media platforms. Diego’s channel on YouTube has more than 75 million overall views.

He also has about 2 million monthly listeners on Spotify.

This concert is organised by Arabian Entertainment House, a Dubai-based company specialising in planning and organising musical concerts.

Timings:
Friday 3 March 2023 from 8pm to 9.30pm.
Times are approximate and subject to change at any time. The show duration is estimated to be approximately 90mins without intermission