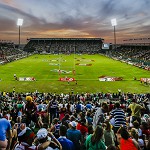 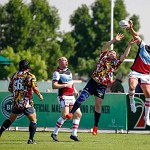 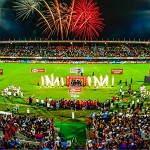 The organisers of the Emirates Airline Dubai 7s have today announced that the 2021 edition of the tournament will take place from Thursday 2 to Saturday 4 December 2021.

The tournament will celebrate its 51st anniversary as the world of rugby returns to the desert following the cancellation of the 2020 tournament due to the COVID-19 pandemic.

The annual festival of sport will see more participants than ever before with the addition of a cricket tournament on the world class ovals of The Sevens Stadium.

Cricket 7s will take its place alongside Netball & Rugby as mass-participation for local, regional and international competition.

Tournament Director, Thomas Burwell looked forward to the 2021 tournament “It’s with huge excitement that we have the opportunity to announce our 2021 date. We understand from teams and players across the world how excited they are to return to the desert this coming December”

“The addition of Cricket is very exciting as more sports men, women boys and girls will get the chance to take part in this iconic tournament. Cricket will bring its own flavour and show case the facilities of The Sevens Stadium”

“We are also very happy to be returning to our traditional dates on the opening weekend of December and due to a reformatting of the schedule we will be welcoming an increased number of teams in Rugby & Netball this year. Entries for all three sports will open on March 1st”

“I would like to thank UAERF, World Rugby and the local government stakeholders for their ongoing support of the tournament”

“Asia Rugby President Qais Abdulla Al Dhalai, said "we are pleased to see the planning for the return of the Emirates Dubai 7s and stand in solidarity with all stakeholders to make this an unforgettable event that will be hosted by Emirates in conjunction with the United Arab Emirates Rugby Federation. We look forward to the participation from Asian Nations at this top-class global 7s event. As a new leader for the Asian Region, I look forward to seeing an increased in Asian participation to this event."

The Emirates Dubai 7s will feature over 350 teams across the three sports in 2021 with more than 50% of participating teams and players coming from outside the Gulf Region underlining the tournaments position as a truly global celebration of sport held in the desert of Dubai.

The organising team have announced several new Dubai 7s events and programs that will take place across the winter including the Dubai 7s schools’ legacy program, The Dubai 7s Development program and the launch of cutting-edge content including the 'The Face of Dubai 7s' and the 'Tales from the Sand' Podcast.

It is stated to take place on November 4th, 2021 at the Conrad Hotel. Guest speakers and wider activations in the community to be confirmed later in the year.

The tournament will also be expanding the Youth divisions in Rugby, Netball & Cricket which will see a series of tournaments and competitions running throughout October & November across multiple age-groups for clubs and schools with the finals of each tournament taking place under lights live on one of the show fields at the Dubai 7s in December.