Proof of Vaccination is not required for this event
- Entry may be refused if the below conditions are not met:
- Please make your seat selection strictly based on your group size (1,2,3 or 4)
- Any selection that is not based on the group size can lead to entry rejection on the day of the event.
- The maximum number of seats that can be selected online is up to 4 seats.
- When choosing your seats online please make sure no empty seat remains next to your selection
- Wearing a face mask is mandatory at all times, including inside the Auditorium. You will be asked to leave if you are not wearing your face mask correctly.
- Please do not attend if you have COVID symptoms. 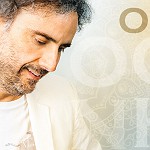 Talented composer and inspiring musician Iyad Rimawi is back at Dubai Opera with a spectacular live concert, "One Night at Dubai Opera" on Saturday 15 October 2022.

After his sold-out performances of his acclaimed concert "Love Letters from Damascus" at Dubai Opera, DWTC and his special participation at EXPO Dubai 2020, Iyad and his Orchestra are coming again to Dubai this October for "One Night at Dubai Opera" Concert which will be a memorable musical evening that is never to be missed.

Iyad Rimawi is a Syrian music composer, songwriter, and producer. In 2012, he was the first Arab artist to sign with Sony Music Middle East.

Iyad Rimawi's views reached 80 million, as his songs are very famous in the Arab World.

Iyad is best known for his soundtracks for several TV series, such as Nadam and Al Arraab.

Rimawi was born and raised in Damascus, Syria and graduated from the Faculty of Mechanical Engineering of Damascus University.

He began playing the guitar at 12, and at 14, he began composing his own music. While studying, he formed more than one band which played folk, pop, rock and oriental genres.

In 1995, he formed the famous pioneering Syrian band "Kulna sawa" with five other members.

The band signed with EMI music and had several hit songs that gained them wide popularity in the Arab world. With Kulna Sawa, Rimawi toured the Middle East, Europe, and the USA, where they received an award for peace after their performance at the United Nations headquarters in New York.

Join us as we listen to the melodies of Iyad, which feature a unique fusion of oriental and classical elements with modern vibes and band elements.

Timings:
Saturday 15 October 2022 from 9pm to 10.30pm.
All times are approximate, running time is 90 mins without intermission

There is an error in the form
You have successfully registered
Related to Iyad Rimawi: One Night at Dubai Opera