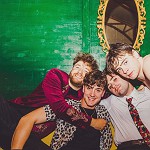 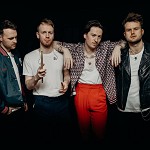 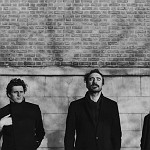 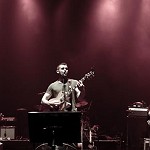 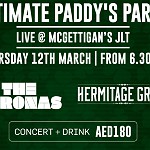 VENUE CHANGE! The Ultimate Paddy's Party next Thurs & Fri will now be held in McGettigan's JLT.

McGettigan's The Ultimate Paddy’s Party 2020 with The Coronas & Hermitage Green on Thursday and & Picture This & The Academic at McGettigan's JLT on Thursday 12 & Friday 13 March 2020.

THURSDAY 12 MARCH 2020
The Coronas
With five double platinum albums, a slew of top ten singles, sold out arena performances and a legion of devoted fans behind them, The Coronas have earned their title as one of Ireland’s best loved and hardest working bands.

The Coronas first burst into the Irish consciousness with their debut single Decision Time in 2007. It had been a decade since the guitar bands of the 90’s ruled supreme and The Coronas injected the Irish airwaves with a refreshing dose of catchy ruckus once again.

A new wave of millennial rockers were arriving (Arctic Monkeys, The Kooks) and The Coronas were leading the pack in Ireland.

By the end of 2007 The Coronas had released their debut album Heroes or Ghosts to huge acclaim and had three hit singles in the charts; the last of which San Diego Song set Irish radio aflame and propelled The Coronas into the spotlight.

Having played at the sold out Ultimate Paddy’s Party last year, the boys are no stranger to McGettigan’s stage and are known for their electric performances and catchy anthems.

Hermitage Green
Hermitage Green have been touring sold-out shows right across the globe since 2010, entertaining fans with their epic performance and irresistible stage presence throughout the Middle East, Australia, North America, United Kingdom and Ireland.

Selling out iconic music venues and performing for thousands of people at some of the biggest festivals, this five piece folk-rock band has had the chance to share the stage with incredible artists such as Lewis Capaldi, Bastille, Two Door Cinema Club, Tom Odell, Gavin James, Sigrid, The Riptide Movement and others.

Head down to The Ultimate Paddy’s Party and don’t miss Irish rockers Hermitage Green & The Coronas who are guaranteed to entertain the masses!

It’s the perfect way to kick off your St Patrick’s Weekend Celebrations.

And join the after party in McGettigan's JLT after the show!

The celebrations continue on Friday afternoon with St. Patrick’s Day brunches from 1pm to 5pm in McGettigan’s JLT, DWTC and Souk Madinat, all of which end up in JLT for another night of incredible live music. \

Post-brunch bus transfers to McGettigan's JLT are included in all brunch packages.

Concert goers are in for a huge treat as one of Ireland’s most exciting young live bands, The Academic take to the stage and belt out tunes from their No. 1 debut album Tales from the Backseat.

Fellow chart-toppers and international sensations, Picture This will headline the Friday concert, wowing the crowds with huge hits like Never Change and Take My Hand.

To attend Friday’s gig, you just need to book a brunch at any of the venues below, hop on a complimentary bus to the event & gain access to this awesome concert.

Picture This
Ireland’s hottest musical export in decades, Picture This arrived as a phenomenon with their self-titled 2017 full-length debut, Picture This.

The album held the #1 spot in Ireland for four weeks, topping the Streaming Chart for seven weeks and went on to achieve triple-platinum sales.

Over the past 3 years the band headlined a sold-out tour around the UK and Ireland, wowing crowds at iconic venues such as the O2 Shepherd’s Bush London, SSE Arena Belfast and 3Arena Dublin.

Summer 2018 marked the band’s first stadium tour of Ireland, finishing off with a 35,000-person stadium show which completely sold out over 3 months in advance.

Continuing the band’s record-breaking list of achievements, Picture This sold out a five-night stint at 3Arena in Dublin in March 2019 and their most recent album MDRN LV became the top selling album from an Irish Artist in 2019.

The Academic
Having amassed over 70 million online streams, sold out venues across the world and reached no.1 in the charts with their debut album, The Academic have come a long way from the battle of the bands competition where they formed as young schoolboys.

Their debut album has since been nominated for Ireland’s most prestigious music award, The Choice Music Prize and their reputation as one of the most exciting new live bands in the music scene hasn’t gone unnoticed with acts including The Strokes, Twenty One Pilots, Foals, The Kooks and more recently The Rolling Stones asking the band to open for them while on tour.

STAYCATION OFFER
Add a hotel stay at the Bonnington for just AED 350 including all taxes and fees with buffet breakfast, free upgrade to Deluxe Room, late checkout at 4pm and access to hotel leisure facilities.