Music in the Studio: Joseph Tawadros

Latecomers may only be admitted at a suitable pause.
- Any use of mobile phones, cameras and other electronic devices inside the auditorium is strictly prohibited.
- The Opera Cafe opens two hours before the performance. 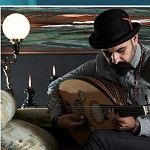 Proof of Vaccination is NOT required for this performance.

Joseph Tawadros is one of the world’s leading Oud performers and composers.

Joseph is a virtuoso of diversity, passion, and sensitivity in renowned concert halls worldwide and is known for his brilliant technique, profound musicianship, and joyous performance style.

Joseph’s drive to push musical boundaries has led to many collaborations with significant performers and a solid repertoire of innovative, original music.

He has recorded 14 albums, received 12 nominations, and achieved four ARIA (Australian Recording Industry Association) Awards – in 2012, 2013, and 2014 for Best World Music Album – and as a contributor to Ali’s Wedding soundtrack album in 2017.

Born in Cairo, Egypt and a resident of Sydney since he was 3 years old, Joseph was nominated for Young Australian of the Year in 2014, received the NSW Premier’s medal for Arts and Culture in the same year and was awarded an Order of Australia Medal (AM) for his services to music and composition in 2016.