Please ensure you print your tickets before arriving.
- Mobile display of your ticket will NOT be accepted for entry
- Print at Home tickets can be presented at the door for entry, you do not need to go to the Box Office prior to that.
- Patrons arriving late to a performance will only be admitted into the venue at a suitable break.
- Any use of mobile phones, cameras and other electronic devices is strictly prohibited. 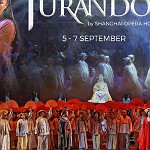 Turandot is Puccini’s final opera, featuring arguably the most famous tenor aria in the opera repertoire, the iconic “Nessun Dorma”, an instantly recognisable piece of music.

Set in Ancient Peking, a beautiful, icy Princess Turandot announces that she will marry the man who can solve her three riddles but gravely punish those who cannot.

Heads roll until the arrival of a clever prince who is determined to win over the princess, or die trying.

He solves her trio of challenges and then offers Turandot his life if she can solve the riddle of his name.

Will true love be enough to soften the vengeful princess’ heart?

This magical version of Turandot, under the direction of Roberto Andò, was held as the first new opera production of Shanghai Opera House’s 2018 Season, receiving wide acclaim.

Consisting of more than 200 artists, this production turns the legend between eastern and western cultures into a test of fear and love.

Produced by Shanghai Opera House, Puccini’s encyclopedia-style opera looks like a prism whilst reflecting the modernity in the music of the 20th century.