The Laughter Factory's 'Taking Over the World One Joke at a Time!' Tour Feb 2022 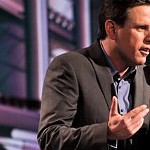 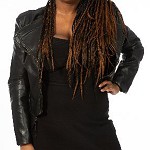 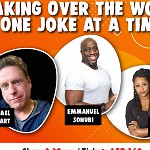 The Laughter Factory’s 'Taking Over the World One Joke at a Time!' Tour featuring the hilarious Michael Gelbart, Emmanuel Sonubi & Dana Alexander comes to Dubai from Friday 18 to Saturday 26 February 2022.

The Laughter Factory is beyond delighted to be opening in the best bar in town, Lock Stock & Barrel, Grand Millennium Business Bay.

The two heavyweights of Dubai nightlife have got together to bring you the ultimate after brunch party.

The very best in live stand up coupled with the liveliest venue in the city is going to be a marriage made in hell. We are all can’t wait to to feel the heat and burn.

Sparking the flames by making his debut on the Laughter Factory, we have the Dom of unbridled and unfiltered comedy.

Michael Gelbart is not only a best-selling author but also boasts prime time specials on Comedy Central and Amazon Prime. He was also a star of the Late Late show and Comics Unleashed.

This risk-taking, comedy-whirlwind, captivates audiences and ridicules them into temporary submission.

When we want a great referral for the Laughter Factory we always turn to Jason Manford for advice, ”One of my favourite discoveries of 2019 was Emmanuel Sonubi. Hilarious, warm and unique. If you don’t see him now, you won’t be able to smugly tell your mates about it when they’re paying £50 for a crap seat at the O2!”

Finally, both ‘Refreshing and Fearless’ is the best way to introduce Dana Alexander.

Her comedic style has been described as ‘smart, irreverent and revolutionary’. Currently one of Britain and Canada’s hottest, emerging young comedians.

So let’s raise the roof and the dead (maybe not!)

Come and join us for what is always the most outrageous, fun, night-out in town.

An Evening with Amir Khan
Sport, One-Off Event
Related to The Laughter Factory's 'Taking Over the World One Joke at a Time!' Tour Feb 2022