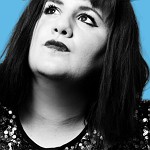 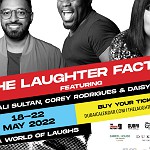 Our second leg of the 10-night festival will feature Scottish comedian of the year, Daisy Earl.

Described by the Huffington Post as ‘Strikingly honest and hilarious,’ Daisy also went on to win ‘Chortle Best Newcomber’ and regularly tours with Jason Manford and John Bishop.

Daisy Earl is a festival highlight. See her.

Making his Dubai debut, Ali Sultan is a Yemeni-American comedian that shot to US fame on Kevin Hart’s Comedy Central’s ‘Hart of The City’ and ‘The Late Show’ with Stephen Colbert.

This comedy provocateur both shocks and delights global audiences. Get ready for some world class-comedy.

His Dry-Bar comedy special exploded and has been viewed over 40 million times worldwide.

Do not miss the chance to see one of the most exciting acts at the festival.

So be prepared for 10 days of guaranteed happiness. We hope you can cope with that!