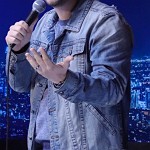 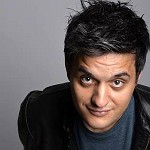 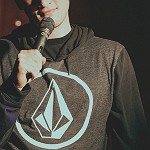 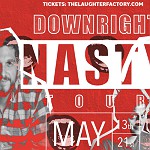 As part of the Dubai Comedy Festival, The Laughter Factory’s 'Downright Nasty' Tour featuring Agostino Zoida, George Zach and Ari Matti Mustonen comes to some stunning Dubai venues from Thursday 13 to Friday 21 May 2021.

The world has changed irreparably, but there is one thing we all still agree on.

There is nothing like a good laugh, especially with other people. It stops us from taking life and ourselves too seriously.

Laughter is the shortest distance between people and closing the gap faster than a rocket to Mars, the Laughter Factory has searched the globe to bring three of the world’s most outrageous stand ups, to shake the cobwebs off your tonsils.

Playing a part in the ‘Dubai Comedy Festival’ meant that the Laughter Factory had to use their 25 years in the business, to source some of the best international comedy talent, that the region has ever hosted.

This Italian-American-born LA resident contributed to shows such as “It’s Always Sunny in Philadelphia” “Louie” and “American Horror Story”.

Next on the bill, fantastically funny, George Zach was lured by the idea of living in the country of Hugh Grant, Mr. Bean, and Lady Diana. But due to the family budget, however, instead of living it large in Notting Hill, he ended up in Newcastle Upon-Tyne.

Get ready for your organs to burst with laughter, when you hear the tales of his unconventional journey into live stand up.

Our final act in May, hailing from Estonia and just returned from a year in Vancouver, Canada, Ari Matti Mustonen has a bright future ahead of him.

With enough on-stage energy, to power a small town and punch lines to match, Ari has been enthralling audiences around the world with stories about life growing up in Eastern Europe.

Forget about your problems. Come and witness the mayhem.

The time has come to be happy!!!