Walking on Cars
Band on stage at 9.30pm 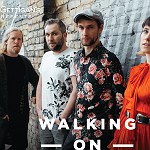 PLEASE NOTE THAT THIS EVENT HAS MOVED TO MCGETTIGAN'S JLT & WILL NOW START AT 9.30PM.

McGettigan's is absolutely delighted to announce that the brilliant Walking on Cars will be performing an intimate gig live on McGettigan’s MJ stage to the picture perfect background of Souk Madinat & the Burj Al Arab Jumeirah at McGettigan's JLT on Friday 6 December 2019.

Walking on Cars have taken the Irish music scene by storm, producing and performing music The Sunday Times has branded “unashamedly epic rock”.

The four-piece Irish pop/rock group formed in 2010, initially gaining popularity when they won the Redbull Bedroom Jam in 2012.

Their debut signal ‘Catch Me If You Can’ stormed the Irish charts, went to number 1 and remained in the charts for an incredible 20 weeks, also reaching number one on iTunes.

Success continued with second single and chart hit ‘Two Stones’ followed by the four-song EP ‘As We Fly South’, and the band became instantly recognised for their unique, emotional Indie sound.

Their next single, "Speeding Cars", came out in October 2015.

Following the international success of the single, the band released their debut album Everything This Way in January 2016, which peaked at Number one in Ireland.

In April of this year the band released their second album ‘Colours’.

We're absolutely delighted to host Walking On Cars as they headline the Amphitheatre for the first time in this stunning setting!