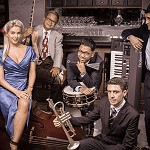 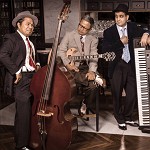 With influences from their respective countries; Armenia, Australia, England and the Philippines, ​The Swing Revue have been drawing in audiences from across the UAE with their authentic choice of swing tunes, versatile instrumentation, energy and expression on stage.

Mixing well-loved and lesser-known jazz and swing melodies from the 20s through to the 50s with original compositions, The Swing Revue have developed an organic reflection of the swing era ambience.

With an already impressive list of high-end clients including French fashion house Lanvin, the famous Ibiza venue now in Dubai Pacha (closed), CATCH restaurant, Maserati and the Dubai World Cup, to name but a few, The Swing Revue continue to build their reputation in the UAE and the rest of the GCC as the premiere jazz and swing band.

Performing their Wednesday weekly residency for the UAE's well respected and renowned music venue, [email protected], and in the company of swing dance group Lindy Hop Dubai﻿﻿; swing enthusiasts have found a home with this boogie woogie band dancing to the tune of artists like Ray Charles, Louis Prima and The Andrews Sisters.

Laura Ingham
Laura was born and raised in London, where she found a love of music at a young age.

Trained in musical theatre, Laura graduated in 2010 before going on to work in shows around the UK and internationally, as well as a tour of the USA.

Since moving to Dubai, Laura has been in high demand as a soloist and has worked in collaboration with many other musicians and bands.

Laura Joined The Swing Revue in the summer of 2015 as the lead singer, and is loving every minute!

​Lakshmi Ramirez
Lakshmi is swingin' the Low End of the band!

Originally from the Philippines, Lakshmi drives the band from his Double Bass and Sousaphone!

Lakshmi's energy and enthusiasm shines through on stage, from his singing, slapping bass solos and bouncing sousaphone lines.

His Love for jazz, swing, and everything vintage makes his simple life colourful.

Eric Bernabe
Eric is the secret weapon of the band! Always happy and smiling, he is as comfortable on guitar as he is on banjo.

Eric is also an accomplished singer, having worked on cruise ships throughout Asia.

Listing his influences as Louie Prima and Frank Sinatra, Eric can perform in many styles and is also known for his Michael jackson dance moves!

Eric loves playing with The Swing Revue and says that 'playing swing music with my friends puts a smile on my face from the beginning to end of each performance.'

Artie Poghosyan
Artie started learning the piano at the age of 7 in Armenia.

Originally classically trained, Artie is an accomplished jazz musician and composer in many musical styles, having studied and performed in London.

Since moving to Abu Dhabi in 2009, Artie has been busy performing across the country with the Abu Dhabi Big Band, The Swing Revue and dozens of other bands.

As well as playing the piano, Artie is a multi-instrumentalist and also plays Bass, Guitar and Drums.

He also loves to play the Pianica and often pulls it out for solos at Swing Revue performances.

​Janelle Bernado
Janelle started playing the drums in punk, ska and rockabilly bands in the underground music scene of Manila.

Swing music was also a large part of his life from a young age, and is influenced by Gene Krupa, Buddy Rich, Daniel Glass and Jo Jones.

Dividing his time between Dubai and Abu Dhabi, Janelle can be seen regularly with The Swing Revue and other Jazz Bands across the UAE.

He also finds inspiration in teaching and sharing his knowledge of music and drums at the T'Rock Enroll Drum Program.

He graduated from the Victorian College of the Arts in Melbourne, where he completed a Bachelor of Music Performance on the trumpet.

Since moving to Dubai, Dean has been busy performing in the UAE, playing with The Swing Revue, Abu Dhabi Big Band, the UAE National Symphony Orchestra, as well as weekly residencies and collaborating with other musicians in bands, quintets and jazz groups.