at The Theatre, Mall of the Emirates, Al Barsha 1

Available at Mall of the Emirates 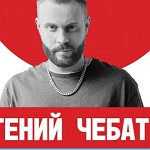 Dubai Comedy Festival presents Yevgeny Chebatkov showcasing the best of his material in "The Way Home" at The Theater on Thursday 13 May 2021!

The young and popular Russian comedian will perform a solo show for the first time in Dubai as part of the Dubai Comedy Festival!

Eugene is known to fans of entertainment shows as a charismatic resident of the Stand-Up Show on TNT and a voice actor.

His comedy of observations has absorbed the best of life in Kazakhstan, where Zhenya grew up, and in Canada, where he began to practice stand-up.

2021 can be safely considered a breakthrough for Yevgeny: his interview with Yuri Dud and his participation in "Evening Urgant" were a great success and brought him even greater fame.

His humour is rightfully called "humor for the brain and intellectual people", and Yuri Dud introduced Chebatkov in his interview as succinctly as possible: "A Russian guy, originally from Kazakhstan, looks like an Irishman, speaks English, Canadian Mormons are joking, and we laugh."

We invite you to plunge into the world of witty, high-quality humour and be the first to hear a completely new stand-up from Evgeny Chebatkov!