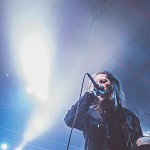 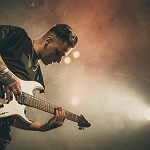 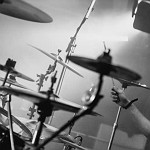 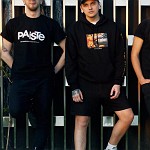 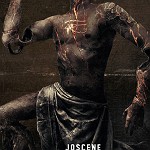 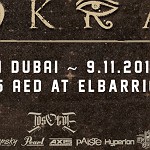 Shokran is a four man progressive metal band from Russia/Ukraine, which perfectly delivers power of the intense riffs, beauty of the oriental and proggy melodies with great vocals accompanied by eargasmic solos.

Shokran started as a Groove/Djent/Oriental Metal solo project by Dmitry Demyanenko in 2012, with the debut EP Sixth Sense.

In 2014, already transformed into a full-time band, Shokran released its debut album Supreme Truth, that has blown away thousands of people’s minds and was shown live during the all-around Russian tour.

Later, however, there was a change in the line-up, and the band was joined by the current singer, Andrew Ivashchenko, and the bass player Valery Yushkevich.

The guys from Shokran were able to release the 2nd album called Exodus in 2015, but delayed the actual release date after the calls from different labels including Sumerian Records.

During the long negotiations, the agreement wasn’t reached and the band decided to release Exodus on their own in September 2016.

It was a conceptual work, that tells us about 10 Plagues of Egypt, each song of Exodus tells about each Plague.

The record took the band to a complete higher level. Shokran gained their respect over the world, went on the road with several tours and began to compose their new album ETHEREAL, which was released in February 2019.

The new record became a new chapter of Shokran’s history.

ETHEREAL is a conceptual album as well, now it tells a story of the main character, that is trying to find himself through the ethereal multidimensional wanderings.

Shokran has hit the European road for the first time, playing their first and instantly successful EU tour with several SOLD-OUT shows as well, following by the Main-Stage performance as one of the co-headliners at UK Tech-Fest 2019 in Newark, United Kingdom and High5ive Summer fest in Stockholm, Sweden.