12+
Below 12 years are not permitted into the Auditorium. 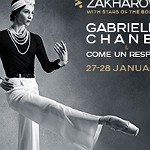 Internationally renowned ballerina Svetlana Zakharova – the Bolshoi’s prima and the Etoile at Teatro alla Scala – comes to the Dubai with a UAE premiere – MODANSE, a double bill produced by MuzArts at Dubai Opera on Friday 27 & Saturday 28 January 2023.

A towering figure in the 21st century ballet will be joined onstage by a star-studded cast of dancers from the Bolshoi Theatre including Mikhail Lobukhin, Denis Savin, Artemy Belyakov, Anastasia Stashkevich, Elizaveta Kokoreva and also by a modern dance star Ildar Gainutdinov.

The night will open with a ballet Come Un Respiro (Like a Breath) by Italian choreographer Mauro Bigonzetti created specifically for Svetlana Zakharova.

The musical basis of the performance was formed by various pieces by George Frideric Handel.

Incidentally, the Baroque period is present not only in the music, but also in dance choreography emphasized by stylish and daring costumes designed exclusively for the ballet by Helena de Medeiros.

The second part of the performance will feature a tribute to the legend of fashion Mademoiselle Coco Chanel. Ballet Gabrielle Chanel is the collaboration by choreographer Yury Possokhov and composer Ilya Demutsky with Alexei Frandetti who created the libretto and acted as director.

The performance narrates Chanel’s journey that has forever overturned the world of the 20th century fashion – from an obscure provincial singer to head of one of the most influential Fashion Houses.

Chanel was inspired by dance, as movement and a metaphor of freedom, as a language and an expression of beauty.

Timings:
Friday 27 & Saturday 28 January 2023 from 8pm to 10pm.
Times are approximate and subject to change at any time. The show duration is estimated to be approximately 120mins with intermission