The Laughter Factory's 'Best Christmas Party in the World, Ever!' Tour Dec 2021

All current government guidelines are complied with at each venue 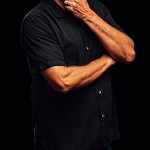 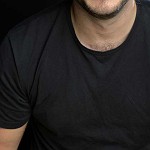 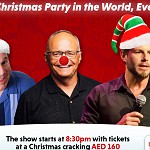 The Laughter Factory’s ‘Best Christmas Party in the World, Ever!’ Tour featuring the hilarious Brad Upton, Chas Elstner and Jimmy McGhie comes to Dubai from Thursday 9 to Friday 17 December 2021.

Laughing, drinking, eating and cavorting. With the ultimate after party ‘Disco Inferno’ brought to you by DJ Gail’.

The Laughter Factory will make sure that grown-ups have the best Christmas party in the world ever!

Ideal for groups of friends and office parties alike The Laughter Factory will guarantee that you and your crew will have more fun than a six year-old on Christmas morning.

This outrageous fun night out, boasts three of the funniest people flown in from the USA and UK.

Making his Dubai debut we have the winner of the Las Vegas Comedy Festival. Brad Upton used to tour with the late, great Joan Rivers. His video about millennials went viral in the summer of 2018 receiving 12 million views in 48 hours.

He was the opening act for Gloria Estefan & The Miami Sound Machine for two years, wherein he performed in 15,000 seat arenas.

He also performed as the opening act for the Pointer Sisters on a mid-west tour and at a special performance at Caesar’s Palace, Las Vegas.

Other performances include, Mr. Peabo Bryson, The Marshal Tucker Band, Phoebe Snowe, Sha Na Na, Brenda Lee and various others. He knows how to entertain people.

Finally, Jimmy McGhie has done five tours of Australia and New Zealand. He performed in ‘Best of the Edinburgh Fest’ to sold out crowds at the Adelaide Fringe Festival.

He also appeared on the ABC Stand-up show ‘Brexit at Tiffanys’.