The Magic of Rob Lake

The maximum number of seats you can purchase together in a row is 4. If you group is larger than 4, Boxes are available that seat between 5 and 10 people and can be purchased via the website (subject to availability) 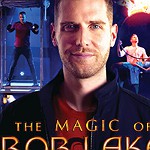 Proof of Vaccination is not required for this performance.

One of the world's most celebrated illusionists, Rob Lake's mind-blowing illusions dazzle and entertain millions across network television and before sold-out audiences in casinos, arenas, and theatres worldwide.

Named "The World's Greatest Illusionist" by NBC, Rob is internationally renowned for his mesmerizing and award-winning illusion spectacular. In 2008, Rob became the youngest magician in history to receive the holy grail of the magic world — The Merlin Award – as 'International Stage Magician of the Year.'

Rob's magical creations can be seen in numerous theatrical productions across the globe, including multiple upcoming Broadway productions and over 1,000 productions of Disney's Beauty & the Beast.

Timings:
Friday 25 to Sunday 27 November 2022 from 8pm to 10pm.
All times are approximate, running time is 120 mins with intermission