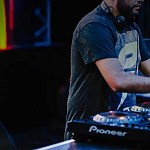 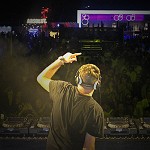 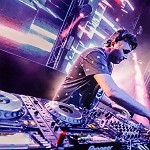 Andrew is currently living in Dubai, experiencing and enjoying the diverse culture of this exciting emirate.

He has played at festivals, super yacht parties, clubs and beach bars.

His unique, charismatic style, outstanding technical skills, awesome ability to read a crowd as well as his contagious, joyful and fun-loving personality have earned him the title ‘Happiest DJ in Dubai’.

His most memorable gig would have to be playing after Pete Tong on NYE to an 8,000 strong crowd for two hours after the fireworks!

Always aiming to push boundaries Andrew can also incorporate playing live keys over his sets, perform turntable tricks and creatively use the latest technology to express his passion and love for music ensuring every event is a memorable one.

He remixed Purple Music’s Classic record Jamie Lewis and Michael Watford’s For You which was featured on their Purple Music All Stars Compilation and ADE Special.

His last release Survivor went straight to no.12 in the Top 100 Soulful House Charts on Traxsource and he has received support from heavyweights Danny Krivit (Body & Soul NYC), Josh Milan from Blaze, Paul Trouble Anderson, Jamie Lewis to name a few and his tracks regularly get featured on Ireland's National Radio Station RTE on his favourite Soulful House Music Show The Digital Groove, where he was invited as their guest on NYE in 2012 to premier his new release live in the Studio.

One of his highlights was watching Michelle Weeks perform the song live at the ADE Festival in Amsterdam 2013 at the Purple Music Parties at Dvars.

After graduating from University in 2011 with a Masters in Music Engineering and Production, he launched his own record label Rejoice Records. His first release was with two of his favourite producers DJ Spen and Richard Earnshaw and after a few releases Andrew was given the opportunity to take over one of London’s leading Underground Soulful House Imprint Solid Ground Recordings.

The labels now have one of the industry’s largest artist rosters, with an extensive list of the music scenes most notable producers and artists having had many number one hits.

Since taking on the label he has continued its fledging reputation only signing and releasing the best in quality Underground Soulful music and has licensed many records to Universal Music, Hed Kandi, Ministry of Sound and Defected, selling records all over the globe on all major platforms for Digital Music.

Recently he has joined forces with Baltimore’s DJ Spen from Quantize Recordings working under the distribution and management of Mn2s based in London.

Presently Andrew is dedicated to channelling his creativity in the Studio. Since his change in music direction, he is aiming to produce music for the commercial and underground market scene ready to rock the globe!

Watch this space and listen for the beats!

“The terrific Andrew Hartley, who combined a high-energy persona with a clever collection of reworked old classics, current popular dance tracks and some downright bold mixes.” Time Out Magazine Dubai

“Andrew Hartley’s record label has reached its fourth release now and I can tell you this is the best one yet! The label head honcho teams up with one of the best female vocalists in the game, Michelle Weeks to come up with a funky, bumpy, yet soulful pearl of a track!” Rating 10/10 Till Late Magazine London