at Sofitel Dubai The Palm Resort and Spa, Palm Jumeirah 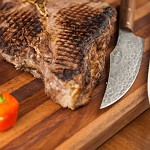 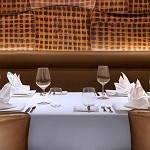 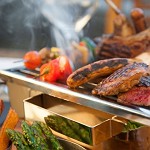 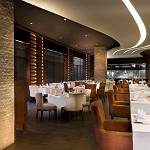 Porterhouse Steaks & Grills offers succulent steaks and other premium cuts of meat are flame-grilled to perfection and served to the accompaniment of soft music and mood lighting.

History of the Porterhouse Steak

What is Porterhouse?
The word porterhouse was used in the United States in the mid 1800's to describe a resting point for weary travellers.

Due to the proximity of the porterhouse to popular thoroughfares, beef and porter could have been readily available and convenient to serve. In addition, without refrigeration at this time, unique cuts of fresh beef like the porterhouse steak were more manageable because of the nearby distribution point of transport depots.

Porterhouse Steak
Many claim responsibility for popularising the Porterhouse. The origin of the porterhouse steak could have come from Manhattan’s Pearl Street around 1814 where the owner of a particular porterhouse, Martin Morrison, started serving large T-bones.

While he established one of the first known porterhouses, it is not clear that Morrison was the first creator of the porterhouse steak.

The porterhouse steak may have also originated in a Cambridge, Massachusetts, hotel and restaurant. The owner associated the naming of the steak after himself, Zachariah B. Porter.

The founding of the original porterhouse may have been tied up in the classic North vs. South rivalry, as the famous 19th century hotel, The Porter House, in Flowery Branch, Georgia claims to have been the first to coin the phrase.

Even among beef aficionados, the argument of «who called it first» is not as important as the fact that the Porterhouse steak has the best of both worlds: Beef Tenderloin on one side and a N.Y. Strip on the other side of the bone.

Whose Line is it?’ brought to you by ‘The Noise Next Door’ 3 Feb 2022
International Artist, Arts, One-Off Event

Whose Line is it?’ brought to you by ‘The Noise Next Door’ 4 Feb 2022
International Artist, Arts, One-Off Event