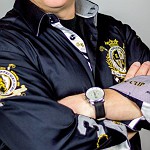 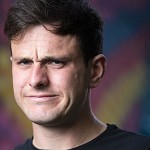 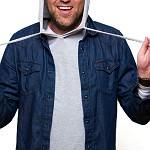 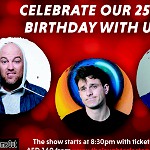 The Laughter Factory comedy club has been keeping comedy fans in the Gulf deliriously happy for a whopping 25 years.

In June 1996 Dubai’s entertainment scene consisted mainly of musical duos sporting mullets and murdering ‘Hotel California’ in bars. Gail Clough was a DJ and Duncan Jones was a drummer, they both wanted to watch some live comedy. Hence, the Laughter Factory was born.

At the Hyatt Regency, Deira up and coming voices such as Russell Peters, Frankie Boyle, Lee Mack and Dara O’Briain had just exploded onto the UK comedy scene. The next generation brought us Michael McIntryre, Jack Whitehall, Kevin Bridges, Mickey Flanagan, Sarah Millican and Jason Manford.

A huge portion of the successful comics on UK TV today can trace part of their roots to our tiny much-loved club in the desert.

Owner Gail Clough says, “The idea that a comic has an authentic voice, rather than just telling jokes is one of major reasons that the Laughter Factory has thrived for 25 years. Life is an ever-changing picture. The Laughter Factory wants its comedy to reflect this.

We are conscious of creating a space where established comics keep mentoring the younger acts. This is what keeps the circuit alive. We want somewhere comedians and comedy fans can come together and enjoy each other.

Being based in Dubai has meant that we are not part of a comedy scene, like in the UK, Canada and US. This has been in some ways beneficial. We don’t get caught up with the latest comedy fads. We focus totally on our audiences and what makes them laugh”.

To celebrate their 25th anniversary the Laughter Factory wants to stay right on the cutting edge by bringing Mike Marino. He is affectionately known to millions of his fans worldwide as New Jersey's Bad Boy - is one of the most loved comedians of our time. He has performed in every major comedy club, theatre, casino and event center from New York to Los Angeles and around the world

Next on the bill, Mike Rice has to be one of the most popular Irish comics in the US today. Spending several years playing some of the best clubs in the states, Mike has both the charm and storytelling abilities of Irish stand-up coupled with the slick performance style that is perfectly crafted in the US.

Finally, back by popular demand one of America’s much sought after headliners, Cory Michaelis is one of our most popular acts. Corey had an epic run of shows a few years back. We cannot wait to hear about his latest escapades.

Come and join us for our 25 years of making not just you but ourselves deliriously happy.

Grand Millennium TECOM
Add one of our comfy rooms and turn a great night into a staycation. Grand Millennium Barsha Heights AED 253 including tax, call Duncan 050 878 6728 to make a room reservation